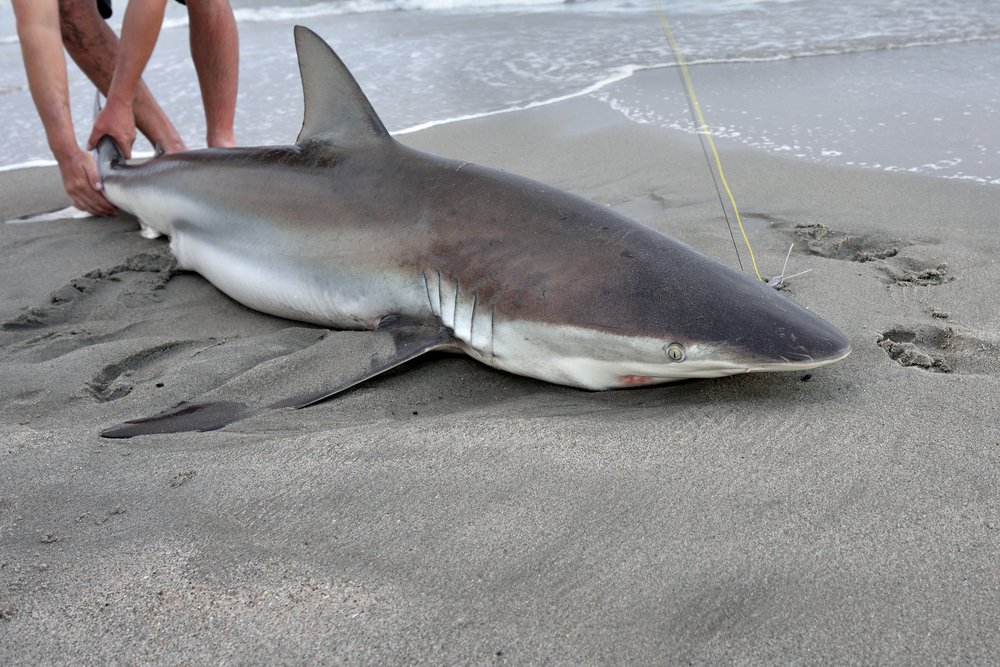 Sharks are one of the most dangerous species in the ocean, so being able to reel one in is an achievement. If you want to pull in a prized catch, you’ll need to learn what kind of bait to use to attract your shark.

The best bait for shark fishing is a local fish like mackerel, bonito, mullet, or bluefish that is high in oils and blood content. The fresher the bait the better, because older bait will start to gain bacteria that could repel sharks. It’s best to throw some chum in the water before casting your bait to attract more sharks to the area so you can have a better chance to catch your shark.

In this blog post, we’ll discuss what types of bait work best for shark fishing and why they’re more effective than others.

What Fish Type is Best for Shark Fishing?

You can essentially use any type of smaller, local fish you want when fishing for sharks. Here are some of the most common options to choose from.

Mackerel is a fish that’s full of oils and fats which is what sharks are looking for.

They can be caught locally by fishing near the bottom on sunny days so they’re always plentiful in some areas.

It’s a good idea to keep them alive until you get out to sea though because once mackerel dies it starts releasing bacteria that will attract other fish, but not sharks.

The Bonito is another fish that is high in oils and fats which is perfect for shark fishing.

It’s a bit easier to catch than mackerel since it travels in schools on sunny days, so if you can find one bonito you’ll be able to get more.

The downside with Bonito is that they are known for giving up a bigger fight so you might need to use a heavier line.

You can find bluefish in the open ocean or near coastal waters.

They are very oily and fight like crazy when you’re reeling them in, but they can also get pretty big. You can always get several pieces of bait the larger your bluefish is.

Mullet is great for shark fishing because it’s very oily and lives in schools, so the more mullet you catch, the better your chances are.

They can be found near rocks or other coastal areas where they like to congregate. Mullets usually aren’t too strong of a fight either which is another bonus.

Herrings have some pretty big eyes so they can see well in murky water and that’s why they’re usually found near rocks or other things to hide behind.

Catching one or two of these will be enough to feed the waters and get a shark’s attention.

Sardines are probably the easiest type of bait to catch since they travel in schools which makes them super easy to hook into.

They are very oily and big enough that you can make a decent-sized chunk out of one for shark fishing.

You might need several sardines because some of them can be quite small but you can actually use some of the smaller ones to create some chum.

A menhaden is a very oily fish that is a favorite for shark fishing. They are usually found near the bottom since they like to hang out in reefs, so you might need some sort of weight to get them down there.

They travel in schools which makes it much easier to catch more than one and use it as bait.

If you’re looking to get a tiger shark, the jack crevalle makes an excellent option.

You might be able to find a crevalle as large as 40 inches but they are more likely around the 10-20 inch range.

When it’s feeding time, sharks aren’t too picky. Any type of live or dead fish bait will be an effective shark fishing lure as long as it’s not too big.

This means using smaller local fish like mullet, mackerels and other types are great choices because this is what they’ll be used to eating in the wild. The exact type of bait you use will depend on your region.

One thing is known, sharks love the smell of blood and that’s because it’s a sign of wounded prey. Sharks can smell blood from hundreds of meters away and it’s one of their top hunting senses.

Using meat or chicken can be another great choice for catching sharks because they’re extremely strong and durable lures.

Not only will the scent attract nearby sharks, but its durability means it won’t break down as fast. Your chances of catching a shark could be higher if you use meat as bait.

Consider the size, the smell, and the freshness of your bait when trying to catch a shark in open waters.

If you’re fishing from the shore, you want to use smaller pieces of meat or whole fish. That’s because the sharks will be smaller and won’t be able to take on larger fish, even if they are wounded.

That all changes if you head to deep waters in a boat. You can throw on some larger chunks because the sharks will be much larger in size.

Sharks are extremely sensitive to the smell of blood so whatever bait you use, make sure there’s plenty of blood on it.

Don’t use cooked meat either if you’re sending it into the water. Raw meat only and the bloodier the better.

Sharks have an incredible sense of smell which is why they are able to hunt down wounded prey so well. Their increased smell also tips them off to spoiled or rotten food that contains bacteria.

If the bait you’re using has been sitting out too long in the sun or is just old, it’s going to be bad to use.

The fresher the better when it comes to shark bait.

How to Catch Your Own Shark Bait

You can catch your own shark bait by fishing in your local waters. This is a time-consuming method and there is no telling how long it will be till you catch your bait.

Be aware of the local fish in the region and the bait that will appeal to these types of fish. Ask local anglers where some of the best spots are to catch baitfish.

The upside to catching your own shark bait is that it will be the freshest possible bait, giving you the best chance to catch your prize shark.

You could hypothetically purchase some bait off a local angler. If they’ve been fishing for a while, it might be worth it to buy a few pieces if they are willing to part with them.

It would be much faster than fishing for your own bait and you could start going for the sharks you really want.

Where To Buy Shark Bait

There’s a ton of local bait shops all along the waters wherever you go.

Usually, they have some kind of flag system too that lets people know if they have live bait or not.

Going in the early morning is probably best since you don’t know when the place will get restocked.

If you go in the morning, you have a better chance of getting what you want.

If you’re looking for something more sustainable like chicken or meat, visit a butcher shop near the coast where people would normally be shark fishing. They’ll have plenty of fresh meat available at discounted prices you can pick up.

Just check the expiration date before buying because you want the freshest meat possible.

You’ll need some bait in order to get a huge shark on the line but the way you attract a shark is with chum.

Chum are smaller pieces of fish that can be bought or made you put out into the water before casting your line.

The point is to throw out your chum into the water once you get to your new location. The pieces will be just big enough to put a smell into the water without providing a ton of food for the shark.

That way, the sharks will still go after your bait instead of already getting their fill.

What Tackle Gear Do I Use For Shark Fishing?

In order to catch a shark, use a heavy-duty fishing line, hooks, and weights.

Sharks are known for having sharp teeth so you’ll need heavy-duty equipment in order to get them on the hook without losing your bait or gear.

A steel leader will keep the line from getting cut by the shark’s razor-sharp teeth.

How Do You Put a Bait on For Shark Fishing?

Cut your bait open on the underside and put your hook through the middle. Then, tie a string around the fish to keep it connected together.

This should keep your hook in the middle of the bait rather than falling out while you’re fishing.

The ropes will also keep your bait staying together rather than falling apart. This is especially true as other fish try to take a piece of your bait while you wait for a shark to come by.

Any type of smaller local fish will work for pulling in sharks when you’re fishing. The oilier and bloodier the fish, the better. You can catch your own bait but that will take a while, so head to a local bait shop to stock up. Just remember to throw out some chum before you make your first cast.