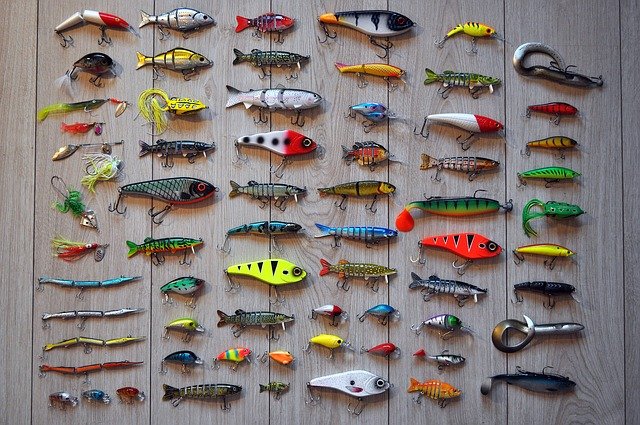 There are all kinds of products on the market that claim to attract fish using scent or that claim to mask your human scent from your line and lure. There are scented lures, lure dips, additives, and more that advertise improved results based on the aroma. Still, many anglers are skeptical of whether fish can even smell bait to begin with.

Fish can smell bait to a degree, but they don’t smell aroma the same way humans can smell it in the air. Fish can only detect small water-soluble molecules, and certain species rely almost entirely on sight to detect prey. Fish are more sensitive to taste than smell, but the two are closely related.

How do Fish Smell Things?

Fish have tiny holes that look like nostrils called ‘nares.’ These nares lead to an area with sensory pads connected to the fish’s olfactory system.

When fish swim, water moves through the nares and flows quickly over the sensory pads. When fish are stationary, some can move water through the system using the tiny hairs in the passages like pumps.

Once the water and other molecules in the water reach the sensory pads, the pads can pick up on chemical signals that get transmitted to the fish’s brain. From there, the brain will signal to the fish whether there is food, danger, a potential mate, or something else in the water.

For example, fish use their olfactory response (sense of smell) to:

Because fish smell things through the water rather than through air like humans, the scents are much more localized. Smells don’t waft through water molecules in the same way that they do through air molecules.

As a result, you shouldn’t expect a scent dropped into the water to suddenly attract schools of fish to your location.

What Can Fish Smell?

These oily additives won’t attract fish based on smell alone, but it is possible for the fish to detect the presence of an oily substance in the water by feel. Since their sense of taste is much stronger than ours, they could taste an additive in the water that makes the bait or lure more attractive than one without any additive.

A fish’s sense of smell is driven by chemical signals. There are certain chemicals that a fish may detect in the water that wouldn’t smell like anything to humans. For example, amino acids and bile acids can leave a scent marker in the water that fish can pick up on.

Natural baits like snails or worms can leave behind a low-level amino acid trail that fish can locate and follow. Certain species of fish are more sensitive to these smells than others.

For example, cyprinids like carp, barbel, and bream are more likely to pick up on baits (natural or artificial) that have natural aminos or natural amino additives.

Bile acids are chemicals that fish excrete after they digest their food. Other fish can pick up on these chemical signals to know that there was feeding activity in the area. This can prompt the fish to hunt in the same area.

This is the most likely reason that prebaiting and chum feeding works to attract other fish. It’s not necessarily the scent of the bait, rather, the scent from the bile acids that attract additional fish to the area.

For example, if a certain bait is used again and again with a hook, the fish may eventually begin to associate the smell with the negative stimuli of being caught (or distress signals from other fish) than with the positive stimuli of food. Once this occurs, the fish will appear to be repelled by the smell rather than attracted to it.

There are certain smells that have plenty of anecdotal evidence to support the fact that fish don’t like them. Scents like motor oil and gasoline from your boat will likely repel nearby fish.

Nicotine on your hands and fingers is another one that fish don’t seem to like. Smells that give away your “human-ness,” like scented soaps, lotions, sunscreen, bug spray, etc. are also potentially driving your fish away.

What Attracts Fish to Bait?

Fish are attracted by bait through a variety of sensory inputs. Depending on the species, some fish use certain senses more than others. However, the most successful baits and lures appeal to as many senses as possible.

Fish like catfish, salmon, and trout are more sensitive to smells in the water compared to other species.

This could be due to environmental factors. For example, catfish typically live and hunt in murkier waters with lower visibility than bass or walleye. For this reason, natural baits that give off greater amino acid signals and other naturally occurring biological stimulants are more successful with catfish.

Since salmon and trout use their sense of smell to help them with migration and mating practices, they’re more sensitive to certain chemical stimulants in the water.

Fish With the Lowest and Highest Sense of Smell

Aside from smell, fish are attracted to bait that moves like their natural food sources. Bait that looks like prey in distress may be enough to bring a big catch your way, while other lures that make certain sounds or vibrations in the water could be the most effective.

The type of bait that you use and how it performs is highly dependent on what type of fish you’re fishing for. That’s why it’s important to do some research before you head out on the water.

Smell is often used in conjunction with other senses, especially when a fish is deciding if your bait is food or not. Taste is typically the deciding factor for whether the fish will take your line or just nibble at the bait.

Fish can determine if your bait is food or a fake within a quarter of one second. Within that fraction of a second, the fish will decide if it wants to eat your bait or spit it out.

This is where the other sensory measures, including scent, can come into play. If the bait gives off chemical receptors that trick the fish into believing that it’s truly a food item, it may hold onto the bait a little bit longer.

This tiny amount of time may be enough to give the angler the advantage and set the hook.

When it comes to the question of whether fish can smell bait, most fishermen agree that, yes, fish can smell the bait and any other odors that your human hands may leave behind. However, the science suggests that the answer is a little more complex than that.

Fish use their sense of smell differently than humans do, mostly because they’re underwater. While we smell odors wafting through the air, fish can only smell molecules that are water soluble. That limits the effects of various additives and scented baits that are oil based.

However, smell and taste are closely related, especially for fish. Often, their sense of taste may be the difference between taking the bait and swimming by. Similarly, there are many naturally occurring chemical signals that can be very attractive to fish.

If you use natural bait, then the amino acids released into the water may be a “scent” that nearby fish can pick up on. Or, bile acids may tell fish in the area that feeding is occurring nearby, so they should try to find the food source, too.

At the very least, bait that produces an “appealing” odor for fish won’t hurt. You may spend some extra money on additives that result in a more successful day on the water, or you may have the same results that you would without any added scents.

The best thing to do is research the type of fish you’re hoping to catch and find out what they like. Use bait that appeals to their natural senses and produce the same kinds of smells, look, and feel as their natural food sources to increase your chances for a big catch.