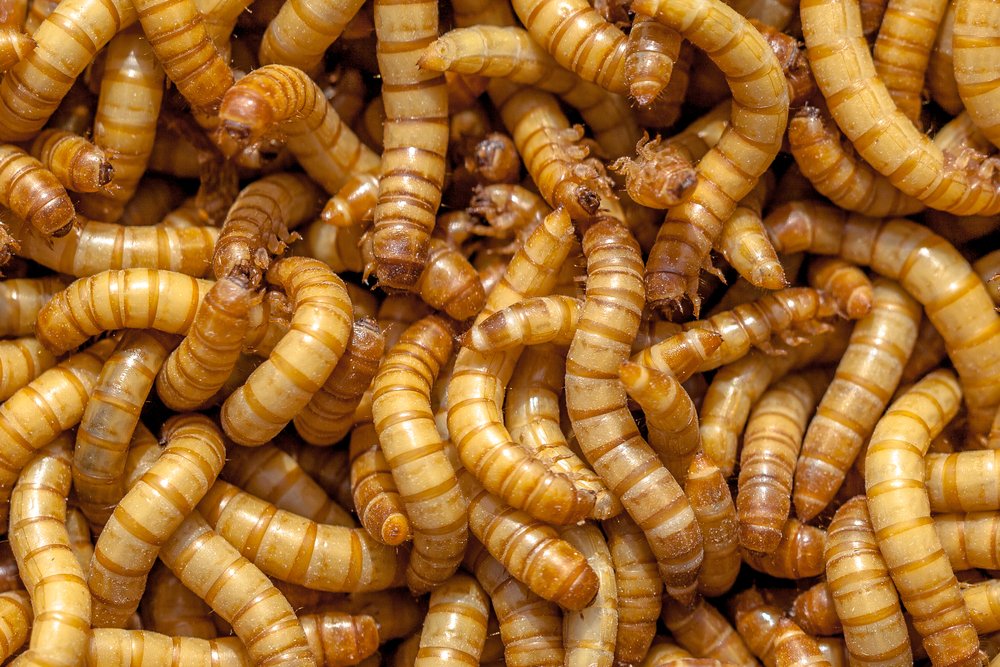 There are endless possibilities for fish bait, but that doesn’t mean that everything is effective. Every angler has their preference depending on what they’re fishing for and where they’re fishing. But, what about mealworms?

You can fish with mealworms in all kinds of environments. They’re effective baits for all different types of fish, and there are many benefits to using mealworms for fishing. Most fish will eat mealworms, but you’ll need to use a small hook for these critters.

Mealworms are typically considered to be pests because they can infest stored food items, especially grains and flours. However, they’re also frequently used for pet food for various types of birds, reptiles, and fish. Some people even put them in bird feeders. Mealworms are desirable for pet foods because they’re high in protein and not very expensive. Mealworms purchased from commercial producers for pet foods usually have special hormones that ensure they stay in the larval stage and keep their “worm-like” form.

Mealworms are also edible for humans and have a long history of human consumption all over the world. They’re still sold as snack foods in many Eastern countries.

These critters are usually a yellowish color and have a firm exoskeleton. They can survive in many environments and range in size from three-quarters of an inch to one inch long.

Are Mealworms Good for Fishing?

Mealworms may be used for fishing and they’re a popular live bait. Their bodies make them more buoyant than other actual worms, which make them a bit easier to control in certain waters. As a universal bait, they’re also appealing to a variety of fish.

Other advantages of mealworms include the yellow color which makes them easier to spot, especially in darker waters. This can be especially useful when catfishing in murky rivers and lakes. The small size is perfect for certain fish species, like trout and perch, and baiting the hook is super simple.

Mealworms also have just the right amount of “wiggle.” Since they’re live bait, they have some movement that indicates to nearby fish that the worm might make for a convenient meal. However, they don’t wiggle as much as some other types of worms, making them even more appealing to certain fish. Many anglers claim that the scent of mealworms is stronger than other worms, making fish seek them out and go for the bait more often.

They’re also a great alternative to maggots if the idea of hooking one of those squishy insects doesn’t appeal to you. The mealworm’s exoskeleton actually helps it to stay on the hook better, too. As a result, you’re less likely to pull up your line to find that a sneaky fish has stolen your bait.

Another reason that mealworms are great for fishing is because they’re really hardy. They survive better than other worms, especially if you’re going to be out in the heat. They don’t dry out as easily as other worms, so they’ll stay alive even if they spend some time in the sun. Unlike shrimp, minnows, or even crickets, mealworms can stay in your bag, in the boat, car, or in a variety of other environments and survive.

What Can You Catch with Mealworms?

You can catch just about anything with mealworms, especially if you use different sizes. Mealworms are considered to be a universal bait, which means that you can use them to fish during any season and virtually any location and have the potential to land a catch.

If you’re fishing in a lake or pond, mealworms are very appealing to bluegill, perch, pumpkin seed, and small bass. Or, if you’re ice fishing in the middle of winter, you can still have luck with mealworms. Perch, walleye, and ling will all be attracted to these little golden critters.

If you care to fish with a giant mealworm, you may have some luck catching large fish like trout or largemouth bass. Catfish love mealworms, but you’ll have to be able to sink them down toward the bottom, which may prove difficult if other fish snag the bait first. Carp is another fish that enjoys a nice crunchy mealworm.

Mealworms are among the best baits you can use for bass fishing. Along with nightcrawlers and red worms, these critters will be hard for a bass to pass up. Small insects are a big part of a bass’s natural diet, so mealworms will have natural appeal.

Mealworms are great bait for bluegill and bass alike, so you’re likely to get a hit on the line either way. Just keep in mind that you’ll need a smaller hook. Mealworms also work well with a jig. Smallmouth and largemouth bass will eat mealworms, but you’ll need to get a bigger worm to have better luck with the bigger fish.

How to Fish with Mealworms

There are several different ways that you can fish with mealworms, whether you use a standard rod and reel to cast out, a cane pole in a local creek, or decide to do some drift fishing for trout.

Mealworms do best on a #10 or smaller fish hook. Remember, they’re more buoyant than some of the other worms and baits, so you may need to put a little weight on the line. For drift fishing, mealworms work best on a #10 gang hook with a barrel swivel and split shot sinkers.

To bait a hook with a mealworm, simply insert the hook into the body lengthwise or thread it through the mealworm’s side. You may have to use more than one worm to fully conceal the hook. However, you should also try to minimize the amount of handling so that you don’t cover the bait with the scent from your hands.

Another method is to insert a #6 – #8 sized hook into the worm’s underside near one end. Look for it’s tiny legs to tell which side is which. Slide the hook through the body until the point comes out near the opposite end. You can use this technique if you’re only hooking one worm or adapt it for multiple.

Can You Fish with Dried Mealworms?

You can use dried mealworms for fishing, but they won’t be as effective as live bait. Dried mealworms don’t have the same natural appearance as live mealworms because they don’t wiggle, so they may not be as appealing to the fish.

However, that doesn’t mean that they won’t still attract some fish to your line. Using dried mealworms with a jig may help attract fish with the same kinds of lifelike movement that make live baits more effective.

No matter how hard you try, there are just some kinds of fish that are unlikely to go for your mealworms. That’s not to say that it could never happen, but it’s just less likely. Lake trout, muskies, pickerel, and pike are not typically attracted to mealworms. These fish are more interested in other smaller baitfish.

How Much Do Mealworms Cost?

Mealworms aren’t the cheapest bait out there but they’re also not the most expensive. Most local bait and tackle shops sell them, so the prices can vary quite a bit. However, you can typically get them for $5 – $20 depending on how many you need.

For example, you can purchase 1000 live mealworms from Uncle Jim’s Worm Farm (available on Amazon) for under $20, and 2000 mealworms for under $30.

Mealworms are a popular choice for fishing bait because of how versatile they are. People fish for a wide variety of fish in all different types of environments with mealworms. They’re not too expensive, easy to keep alive, easy to use, and they appeal to all kinds of fish.

Mealworms are especially popular for ice fishing, but they’re also good for fishing during the warmer months. The yellow color and strong exoskeleton make them good for baiting a hook and drawing a fish. The natural movements that they make along with the scent can be very attractive to the right fish.

Most any fish will eat a mealworm even if it’s not something they seek out. The size and appearance of the worm makes it seem like easy prey for a hungry fish. In cold water or when fish are tired, it’s something they can eat without having to go on too much of a chase. An easy meal for the fish can mean an easy catch for a lucky angler. Plus, they’re less likely to steal the bait from the hook compared to other worms, which makes them the ideal choice for a live bait that’s convenient and easy to use.