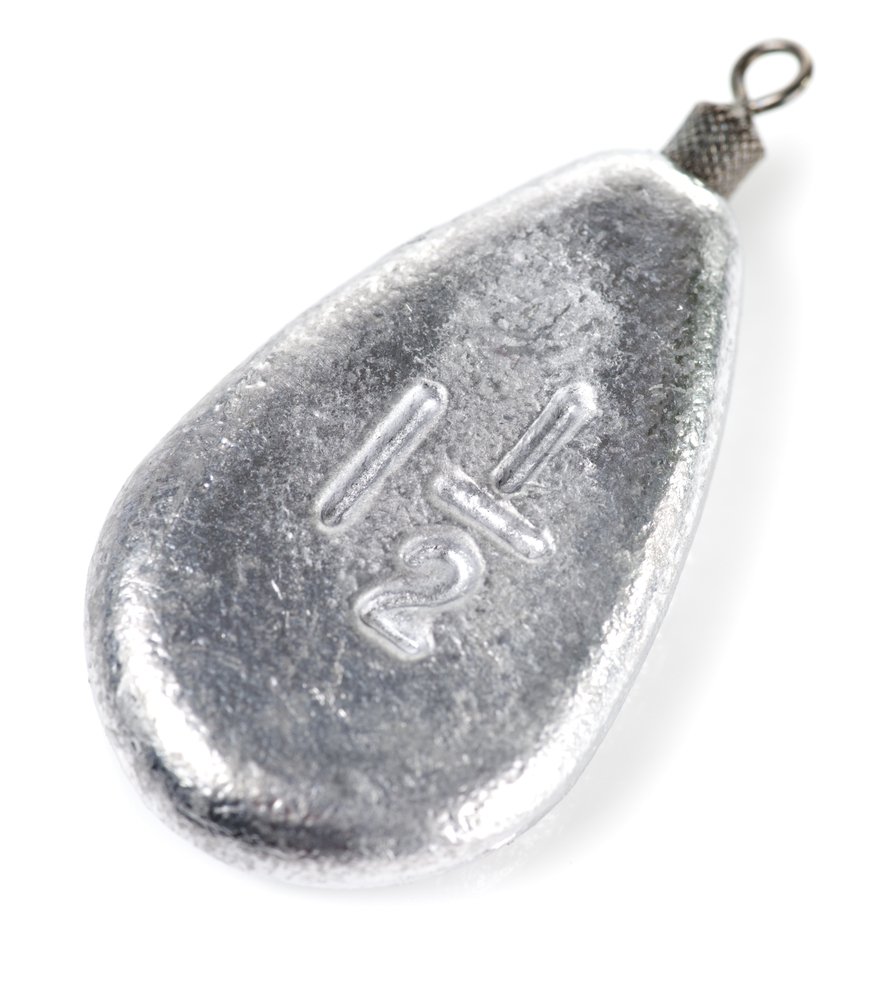 Fishing weights are a must-have for almost every angler. Not only do they help lower your bait, but they also increase the length of your cast.

Most fishing weights contain lead, while a small percentage have materials such as steel and brass. Lead is the material of choice because it’s cheap and dense.

Want to learn more about fishing weights made of lead? Keep reading, and we’ll tell you everything you need to know.

What Are Fishing Weights?

A fishing weight, also known as a sinker, is a piece of metal that you attach to your line. What’s the purpose of the weight? The small amount of metal helps lower the bait deeper in the water.

Not only does the bait go deeper into the water, but it also sinks at a faster rate. Most anglers have various fishing weights on hand, depending on where they’re fishing or what they’re trying to catch.

If you’ve taken physics before, you probably know that weight adds distance. By hooking a weight onto your line, you can cast longer distances.

A long-distance is beneficial if you want to fish in an inlet that’s hard to reach by boat. Moreover, the length of your cast can also make it easier to catch certain types of fish. For example, if you want to catch catfish, you need to cast around 25 feet.

What Are the Different Types of Fishing Weights?

There’s a wide variety of different fishing weights. Anglers switch them up depending on what fish they’re trying to catch and local conditions. There are some of the most common fishing weights:

As the name suggests, a “trolling” weight literally trolls fish because it looks like bait. These weights are great for getting your line deep into the trenches where fish are prowling for their next meal. Many anglers use trolling weights to catch catfish.

Although a downrigger is not the standard “weight” you attach to your lure, it has a similar purpose. Downriggers feature motors that lower the line into the water. In fact, anglers don’t even have to put their hands on the device for it to work.

Many people use downriggers to catch deep fish with minimal effort. Downriggers start at $100 or so, but you’ll have to shell out more cash if you want a durable one.

The next fishing weight on our list is a pyramid sinker. Even though people call this weight a “pyramid,” it looks more like a shark’s tooth.

Bullet sinkers – with their spherical shape – are great at getting through vegetation and debris in the water. As the same time, these sinkers resemble that ammo that you put in a gun. These sinkers are cheap and great to have on hand, no matter where you are. You can buy a bullet sinker for less than $3.

At first glance, a claw sinker slightly resembles a pyramid sinker. These weights boast a triangular shape with a hollow center. You can purchase them in a variety of sizes, ranging from one ounce to eight ounces. Their unique design means these sinkers have a generous surface area, making them highly effective.

Anglers use deep drop weights when they mean serious business. These weights are on an entirely different level and typically weigh between 8 to 12 pounds. Most deep drops weights boast a brass finishing and come from either the United States or China.

Compared to the other products on our list, you can expect to pay more for these plus-sized sinkers – generally $50 or so for a larger one. The weights have a spherical design and a flat end that helps them stand.

The Main Materials You’ll Find in a Fishing Weight

Most fishing weights feature some metal, with lead being the most common. However, other popular materials include brass, tungsten, aluminum, and steel. In addition to metal, some fishing weights have glass.

We’ve answered the question, “are fishing weights made of lead?” However, we haven’t explored why lead is so popular. Firstly, lead is notoriously cheap. According to the most recent market statistics, lead costs roughly 90 cents per pound.

On the other hand, other metals can cost a dollar or a couple of dollars per pound. Therefore, many manufacturers use lead because it’s cheap. Does it pose some dangers? Yes, but many anglers overlook them.

Lead’s high density is another reason it’s a popular component in fishing weights. The density of lead is exactly 11.29 grams per cubed centimeter. So, not only is lead cheap, it’s also heavy and an effective way to add weight to your fishing line. There’s also a handful of other benefits associated with using lead in fishing weights.

To begin, it withstands weather and won’t wear down as fast as other materials. Lead’s anti-corrosion nature is one of the key reasons people used to build houses with lead pipes. Furthermore, lead is quiet, which certainly helps when you don’t want to scare away fish.

Yes, lead can be dangerous, but it depends on your level of exposure. According to the CDC, exposure to lead can cause headaches, fatigue, and even memory loss. In the worst cases, lead can cause anemia and ultimately death. Lead is hazardous for pregnant women because it damages their baby’s nervous system.

Fortunately, most lead fishing weights aren’t dense nor big enough to cause severe damage (unless you buy a deep drop weight). Nevertheless, it’s always good practice to use caution.

You should never store lead weights in the same container as food and beverages. Furthermore, make sure that your kids can’t access the weights because lead is incredibly toxic to children.

If you follow simple safety measures, you shouldn’t have any issues with a lead fishing weight. However, if you’re worried, you could always buy one made from steel or aluminum. Many anglers prefer lead because it’s a heavy material and doesn’t cost very much. Plus, you’re fishing – not drinking water out of the lead weight.

Let’s talk about lead – the good and the bad. Here’s a handful of essential lead facts and statistics:

As you can see, lead production is a large industry. Many manufacturers use lead in the production of pipes, batteries, cosmetics, and of course, fishing weights. Lead has always been a go-to material because it’s easy to refine and cheap relative to other metals.

Some countries with the most lead production include China, Australia, the United States, and Peru. However, many countries are shifting away from lead due to some of the risks associated with the material.

Should You Buy a Fishing Weight Made With Lead?

If you walk into an outdoors shop, chances are, more than half of the weights contain lead. You should buy a lead fishing weight if you’re on a budget and can use simple caution.

For example, don’t leave a lead weight around young children or pets. Because weights are small and not used for drinking or eating, the risks are relatively slim. Comparing lead weights to lead pipes is like comparing apples to oranges. The latter is much riskier because it can contaminate your drinking water.

Ultimately, it’s your decision. You’ll find that lead weights are a great way to reach deep water and catch certain fish species, such as catfish. You can amass quite the collection of lead weights, thanks to their low price point.

If you’re still on the fence about buying lead weights, then you should speak with friends who fish or read reviews online to give yourself peace of mind.

Do You Always Need a Sinker When Fishing?

No, you don’t always need a sinker when fishing – it’s optional. For example, not all anglers use weights for fly fishing. However, you should generally use a weight if you’re using bait or trying to cast a long distance.

You’ll also almost always want to use a weight in salt water, depending on what you’re trying to catch.

When is it best not to use a sinker? Typically, when you fish in shallow water, you’re trying to catch fish that swim near the water’s surface.

Understanding Where to Put The Weight on Your Fishing Line

The placement of a weight depends on the style that you’re using. Some weights are hollow, and some have a loop that you’ll need to tie. It’s relatively simple to figure out how to put on a weight.

Moreover, most products come with instructions, and if you still can’t figure it out, you can look up a how-to video.

Lead is cheap, and it’s also heavy – meaning you’ll be able to cast deeper and longer. Although lead has its downsides, you shouldn’t run into problems if you follow common sense.