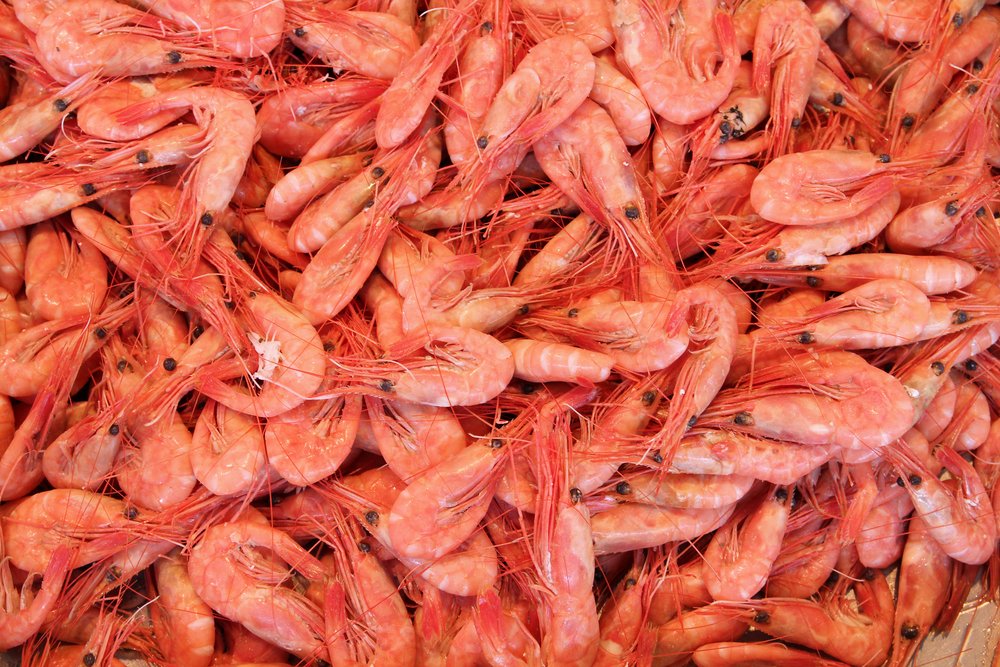 Catfish are easy to find, bite often, and put up a good, fun fight. These muddy water dwellers are known for loving stinky, smelly, disgusting baits. However, not everyone wants to bait their hook with slimy chicken livers, so what about something more ‘normal,’ like shrimp?

Shrimp is a very good catfish bait, especially for channel cat and bullheads. It’s easy to find, easy to use, and inexpensive. Catfish especially like store bought shrimp once it starts to spoil. Some people use spices or seasoning. You can also catch live, freshwater shrimp for free bait.

Shrimp can be an excellent bait for catching catfish. It’s extremely versatile and appealing to many types of catfish. You can use fresh or frozen shrimp, saltwater or freshwater shrimp, “people” shrimp, or bait shrimp. You can purchase shrimp just about anywhere and it’s typically not very expensive.

Not to mention, shrimp is an appealing bait to many other types of fish. So, if you’re looking to catch more than just catfish, shrimp can be an excellent bait choice.

Shrimp works well as bait because it’s natural. You don’t have to worry about the catfish being tipped off by artificial materials or chemical smells. When the fish bites, the natural bait will confirm that it has found food, so there’s much less of a chance that the fish will spit out the shrimp.

You can have a lot of luck catching channel catfish and bullheads using any type of shrimp. It can be used for trotline fishing or traditional rod-and-reel casting. You can use shrimp dead or alive with the same results.

The only time we wouldn’t recommend using shrimp is if you’re fishing for flathead catfish. In that case, you’d be better off using a live baitfish. You may be able to catch a flathead with shrimp, but most people have more success with something like minnows or bluegill.

You can certainly use plain shrimp right from the store to fish for catfish, and you’ll probably have some luck. However, many people swear by various techniques to prepare their shrimp for catfishing that produces better results.

Adding various spices, marinades, and other additives to your shrimp may help make it more appealing to the fish. However, you should keep in mind that this is purely anecdotal information. Everyone has their own specific tips and tricks that may work great in one area and make no difference at all in another.

One option is to make flavored shrimp that can increase the overall scent of your bait and make it more desirable to the catfish. Some people add Kool-Aid powder to their shrimp, while others add garlic seasoning. Others recommend marinating the shrimp in the seasoning of your choice for several days to make the scent even stronger.

Many people use spoiled or rotting shrimp for catfishing. The foul stench makes them extra appealing in the water. One way to do this is to let your shrimp sit out in the sun for a couple of days. Of course, you’ll need to be able to stomach the look, feel, and smell of these putrid shrimp when you’re out on the water.

How to Put Shrimp on Your Hook

There are two ways to go about baiting your hook with shrimp. You can either put the hook through the shrimp’s head or through its tail. You can hook through the head for either casting or trolling, and there are a few ways to do it. Some people prefer to hook through the body, which is better for certain situations.

Baiting a Live Shrimp Through the Head:

For bottom fishing, insert the hook from underneath the head, pushing the barb upward until it comes out through the top of the head. Take care to not damage internal organs.

Another technique for bottom fishing is to insert the hook through the top of the head, not pushing all the way through. Angle the hook so that the barb goes underneath the vital organs and then back out in another area on top of the head.

For drift fishing or float-rigging, you can push the hook crosswise through the shrimp’s carapace. Insert the hook just below the shell tip, avoiding the dark spots on the shrimp’s body that indicate the presence of vital organs. The shrimp will retain its natural swimming motions, which can be more appealing to the fish.

However, not everyone prefers this method because the shrimp is more likely to fall off the hook if it’s rigged through the head. Also, the fish can eat the bottom half of the shrimp without engaging with the hook.

Baiting a Live Shrimp Through the Tail:

Another advantage to hooking the shrimp using this method is that breaking off the tail releases the scent and chemical signals into the water that can help attract catfish and encourage a bite.

What Kind of Hook Should You Use for Catfish?

Circle hooks are the most effective for catfishing. The biggest issue that people have when using circle hooks is that they use a hook that’s too small. Aside from being more effective at setting the hook, circle hooks also decrease the mortality rate of any fish that’s caught and released.

With the traditional J-shaped hooks, catfish are more likely to swallow the bait and hook together, resulting in the fish getting gut-hooked and later dying from internal injuries. Circle hooks, on the other hand, are designed to snag in the corner of the fish’s mouth.

After the fish swallows the bait and starts swimming away, the natural movement pulls the hook out of the throat, lessening the chances of the fish being hooked inside the throat, mouth, or stomach. The hook is designed so that it naturally rotates and sets in the corner of the mouth instead.

If you’re fishing with a circle hook, let the natural motion of the fish set the hook. There’s no need to jerk your rod or line as you would do with a traditional hook. Doing so will usually snatch the hook out of the fish’s mouth.

As the catfish starts to swim away with your shrimp, just apply slow and steady pressure or begin reeling the line slowly. This will facilitate the hook setting into the jaw.

If you have dead shrimp, you can store them in a brine in a sealed jar. The salt in the water will also help to preserve the shrimp while toughening up the skin and meat so that it will stay on your hook better.

If you have frozen shrimp, you can re-freeze them to use on your next fishing trip. Just ensure that any bait is clearly labeled if you’re storing it in the freezer with your food items.

If you let the shrimp start to rot before using it, make sure to discard it at the end of the trip. You don’t want to save bait that’s already spoiled.

Catfish are known for being opportunistic feeders, making them fairly easy to bait. Shrimp is a great catfish bait because it’s easy to find, relatively cheap, and extremely versatile.

You can spice up your shrimp or add your own special marinade to increase its appeal to the fish, or you can lay it out in the sun to let it spoil.

You can buy shrimp from a supermarket or bait shop, purchase frozen shrimp, or catch your own live shrimp. There are also many different ways to bait your hook using shrimp. Overall, shrimp is a catfish-friendly and easy to use bait that’s popular among all kinds of anglers and all skill levels.