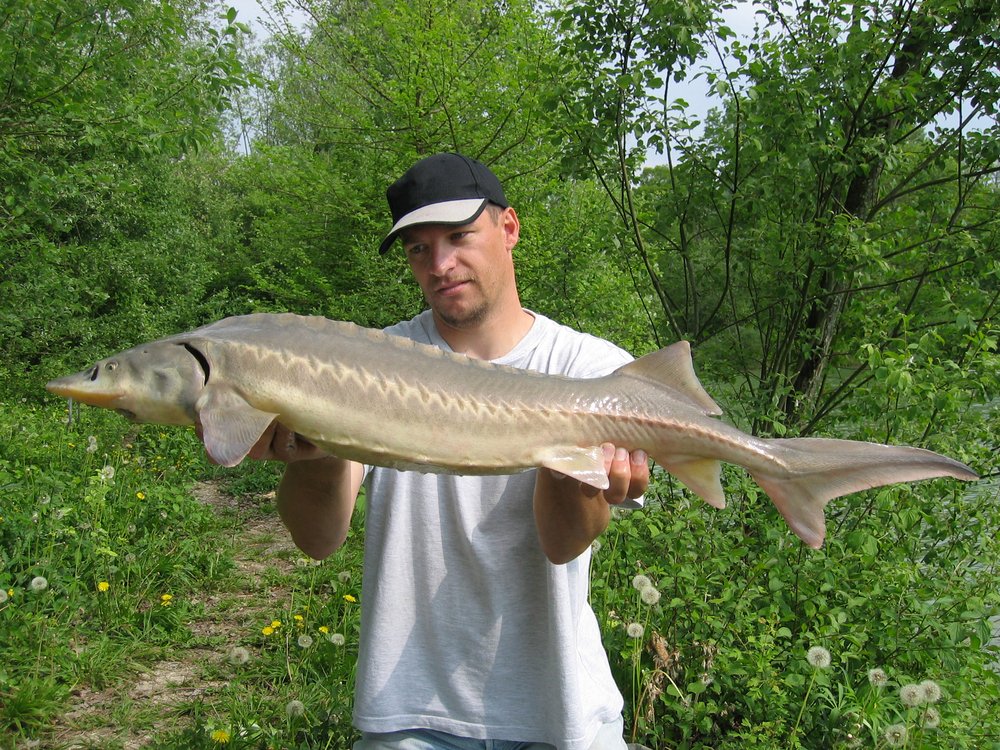 Fishing is one of the great pastimes. Originally utilized as a skill to gather food, it has become a hobby for many across the globe. Whether it’s fly casting or bait fishing, anglers find the exercise an act of patience and peace.

Fishermen go for various species. Some are in it for stream fish like trout. Others take to seas and oceans for species like Mahi, grouper, and marlin. A common fish that anglers go for in both environments is sturgeon.

To fish for sturgeon, you want to use bait that includes freshwater clams, salmon eggs, or crawfish. It should be fresh. However, adding scents to dead bait still catches the attention of the fish.

What Bait Do You Use For Sturgeon?

This species of fish loves live bait. Plus, they aren’t too particular about what’s on the hook. The most common bait to use for sturgeon are:

It’s best to collect your bait right before you start fishing. However, if the live version isn’t available, then you need to add scents to attract the sturgeon. This includes fish oils that smell like shrimp, shad, or sardines.

How to place the bait

The type of hook you utilize to catch sturgeon depends on the species. It’s recommended to go with sizes between 5/0 and 9/0. These are considered medium to large-sized hooks.

You can place the bait two ways. You could add it to the hook then tie everything to the line, which works when your bait isn’t live. Doing so with an active crawfish could be frustrating. If this is the case, then tie the hook to the line first then add the bait.

A sturgeon is more than one type of fish. It represents 27 different species under the Acipenseridae family. Normally, they’re found swimming in freshwater lakes and rivers and along saltwater coastal areas.

A majority of them reside in the Hudson River, Mississippi River, and the Great Lakes. However, various sturgeon species have been found along the coast of the North Atlantic, the Meditteranean basin, the coast of Italy, and Russian rivers that feed into the Arctic Ocean.

Sturgeon aren’t tiny fish. Mature ones reach up to 18 feet (5.5m) in length and could weigh up to 400 pounds. Some of this comes from the five lateral rows of bony plates called scutes.

The fish is long-living and matures late in its life. Its span is anywhere between 50 and 60 years. Furthermore, sturgeon don’t start maturing until they’re around 17 years of age.

Unlike other fish, sturgeon don’t spawn annually due to natural conditions. However, when the time is right, the female sturgeon could release anywhere from 100,000 to three million eggs.

The unfertilized eggs, called roe, are harvested and salt-cured. This is when they become the delicacy caviar. In some areas of the world, sturgeon have been overharvested to create this food.

How To Fish For Sturgeon

Sturgeon are found in various locations. They swim through rivers and up coastlines. This means they could go from freshwater to saltwater during their journey. Furthermore, in the winter, they tend to swim in deep holes to stay warm. These could be anywhere from 10 to 50-feet deep.

Needless to say, the way anglers catch this species of fish depends on the season and location. What is known for certain is sturgeon aren’t caught through fly fishing.

What is fly fishing?

Many anglers consider fly fishing the purest form of this activity. The object is to fool a fish into grabbing a lure instead of enticing them with live bait and scents. This is done by casting the fly on the top of the water or slightly below.

This is the main reason why you can’t fly fish for sturgeon. This fish tends to swim deeper in rivers and streams. Thus, they’re attracted by bait that’s cast deeper into the water. Furthermore, even with the strongest line, pulling in a sturgeon of several hundred pounds could result in a broken line and pole.

What is bait fishing?

The method that’s best to catch different species of sturgeon is bait fishing. There are a few differences between this form of angling and fly fishing. First, it’s used to catch rough (coarse) fish like sturgeon. Second, it takes place in deeper waters.

The third difference is what’s used to snag a fish. Flies are usually artificial and mimic items like dead insects. On the other hand, bait fishing could use artificial or live material. The frequency of one or another depends on the type of fish you are interested in.

How To Catch Sturgeon

Fishing is an art. It requires the right equipment, bait, patience, and finesse. Combined, these help you catch sturgeon in any environment.

Here are suggestions on the tools, bait, and locations best to fish for sturgeon.

If you dedicate yourself to catching sturgeon, then you want a fishing rod that’s six to nine feet in length. It’s recommended to select a one-piece tackle instead of a rod that needs assembly. It comes down to strength and flexibility.

Stick to rods that are made of graphite. Strong and pliable, this material bends with the line to help maintain a hold on a sturgeon. A one-piece bamboo rod is also a good idea. However, it costs more, particularly when it’s custom-made.

As for the reel, go with a bait cast version. This sits on top of the rod for better balance. The line itself should hold 80 pounds at the minimum. Furthermore, make sure to get a spool that runs at least 250 yards.

If possible, spend a little more on the line. Avoid monofilament when fishing for sturgeon. It’s not because this material isn’t strong. Rather, the combination of the sun’s UV rays and extended use in the water weaken the line. Should you catch a heavy sturgeon, there’s a chance the line will break.

A braided line is more efficient for this fish species. Twice as strong as monofilament, it’s light enough so more fits on a standard spool. It’s also low friction, so fraying is minimized when bringing in a catch.

Where you go to catch sturgeon depends on the location and time of year. In the warmer months, the fish swims along with the tides in search of food. During the colder months, it searches for food nearer the holes where it stays.

Sturgeon swim in river channels, lakes, and up & down coastal areas. So, the best places to cast your line are on ledges, sand flats, and rocky points. if the tide is out, then you want to look for areas of deeper water. Sometimes, you can find sturgeon in small pools of water that are four to six feet deep.

Spring is the best time to fish for sturgeon. They’re also in abundance when they spawn at summer’s peak. As we previously mentioned, sturgeon are particular where they spawn. So, choose areas where the water temperature is between the low 40s and 60s.

How To Know When You’ve Caught A Sturgeon

How you know when a sturgeon is on the line depends on the weather. In colder weather, their bite is slower and more repetitive. The repeat action helps you overrule it as the movement of tides.

In the summer, especially if they’re spawning, the bite is aggressive. You’ll know a sturgeon is on the line when it and the rod dip. In the end, fishing for sturgeon is an adventure. Yet, the return on investment is worth the feeling of catching a fish that rapidly moves through the tides.