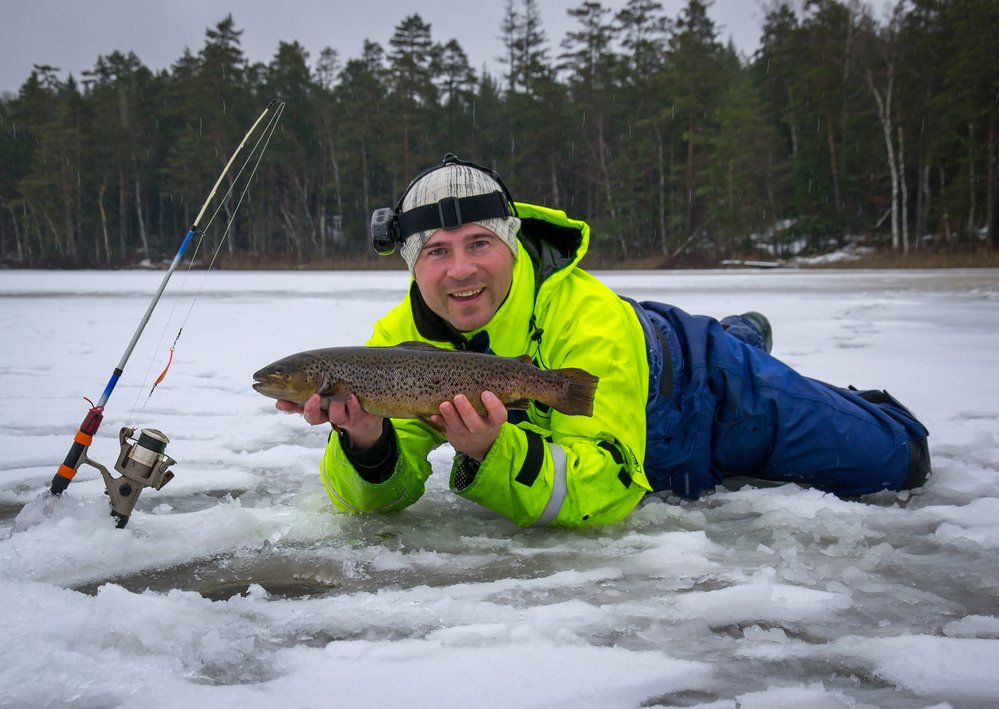 It would be almost too easy to simply say that one jig head was the perfect size for all trout. But, that’s just not the case.

The reason is that trout are a varied group of divergent fish that share a few common characteristics, but that are not attracted the same, don’t feed on the same bait, and definitely are not the same when it comes to feeding times, appetites and eagerness to strike.

We’ll start with a couple of definitions, one for the fish you’re after and the other for the style of fishing you’re going to try to catch them.

Trout come in many varieties, the most common are rainbow, brown, cutthroat and brook. But, there are also tiger trout, golden trout, and hybrids such as palomino trout and splake. Add in the apex predator generically called a lake trout and you have a big range of fish bearing the same name.

They can be tiny brook trout, weighing just a few ounces to monster rainbows, browns, and lake trout that often exceed 40 pounds when tying into a record sized fish.

Jig heads are varied as well. They come in sizes ranging from tiny 1/32 ounce up to 1/2 ounce sized heavyweights. The answer to your fishing question lies somewhere between these two extremes.

A 1/16th to 1/8” ounce jig head works for almost all styles of trout fishing. The standard lead head jig, connected to a hook ranging from a #2 to a #10 will hold a variety of synthetic minnows, leeches and other aquatic creatures.

In the lakes of Minnesota, the Dakotas, Wyoming, Colorado and Montana, the silver and black, Gulp minnow reigns supreme, connected to a #6 hook on a 1/16th ounce jig head.

How to Fish With a Lead Jig head

Using lead jig heads for trout limits the areas you’re able to fish. Fast moving streams are not a great locale for jig heads, swift moving rivers with strong currents aren’t the best either, but in the case of the large moving water, you can successfully land big trout, along with a surprising number of walleye and perch if you select the right area of the water, and handle your jig head and line correctly.

The ideal location for using jig heads after trout is a lake or reservoir with a steady flow of water running into it. Natural tributaries into lakes in the form of streams and small rivers bring a lot of food into a lake.

Trout will congregate near this easy bounty of worms, grubs, insects and baitfish. You’re goal is to mimic those baitfish with a rubber minnow, and jig it correctly so it will catch the attention of a hungry trout.

This method is a double-edged sword. If too much feed is flowing into the lake, the trout will be lazy from the abundance of food and not likely to strike. If too little flows, they won’t be hanging around at all, instead they’ll seek a more bountiful source of food.

In a “Goldilocks” style setting, you don’t want too much, or too little in the way of a trout’s food supply, you want it to be “just right.”

What Size Jig head for Trout?

Trout in a lake setting fill every niche of the food system as they grow. When they hatch they are the prey of other trout, bass, walleye, perch, pike, muskie, and even larger pan fish.

As trout grow they move higher in the food chain until they reach apex predator status after weighing in at eight or more pounds in most lakes, rivers and reservoirs.

Selecting the right jig head for the size, aggressiveness and feeding habits of the trout in the body of water you’re about to fish can either make a memorable day, or a miserable one.

If you’re after smaller trout, say rainbows or browns up to 18 inches and perhaps two pounds, a smaller 1/16 ounce lead jig with a minnow only one-and-a-half inches long will do the trick. A well kept secret among experienced anglers is that the size of the bait doesn’t limit the size of the fish you’ll catch.

A small jig like this arrangement can bring in monster trout. These fish are after a meal, and anything within striking distance is fair game.

If on the other extreme you think only bigger fish will hit bigger lures, many anglers have reeled in tiny trout completely snagged on double sets of treble hooks when striking a Rapala or other tandem treble-hook lure almost the size of the fish that hit the big lure.

River Jigging for Trout, Is it Different?

Jigging in fast moving water for trout is an art. You’re likely to snag a lot of aquatic plants if you try traditional lures such as spoons, and spinners.

The advantage of a heavier 1/8th ounce jig head in moving water is that it is virtually weed free if the rubber minnow is attached correctly.

The upward curve of the hook in alignment with the eye just above the lead ball of the jig keeps the body of the rubber minnow in contact with any submerged vegetation, allowing the hook to slide freely through the water without getting entangled.

This action mimics a baitfish as it darts in and out of submerged aquatic plants in an avoidance pattern that larger trout can’t resist.

Hook that 1/8” jig with a two to three inch black and silver Gulp minnow and you’ll get action if there are any trout in the vicinity.

The arrangement allows the jig to float down river with the current, offer more exposure to your bait.

If you do get a strike, you’ll know where the trout are likely to be hanging out at in underwater pools and eddies that break the current.

Lake and Reservoir Jigging for Trout

The ideal jigging situation remains the shoreline of a large natural lake or a reservoir. You can jig from a boat, and we’ll discuss that later, but jigging from shore is the perfect application for catching trout.

The optimal jig head weighs in at 1/8th of an ounce, some anglers prefer the off sized 3/16th sized jig head, and it works as well, with just a little more heft that allows longer casts.

There is a caveat to more weight on a jig, it loses sensitivity to light strikes, the type that browns often make, when compared to lighter jig heads.

Attach the same silver and black Gulp minnow to your jig head and toss it out just past the last ripples of an incoming stream or irrigation ditch. You can work the water next to the incoming flow as well.

Fish can be in the current, but food is usually washed to the side or dumped off a shelf just past the last indicator of flowing water. Where the food is, there the trout will be as well, and it’s up to you to present your jig head and minnow correctly to get strikes.

Does the Color of a Jig head Matter?

Many anglers fish with solid black jig heads. Others prefer white dots on a black head to mimic the eyes of a baitfish. There are many who simply toss the grey, unpainted lead jigs into the water and experience great success.

There is a final group that believes the color of a jig head affects the striking patterns of trout. These anglers will use orange heads, florescent green heads, white painted heads with green, red, orange or black eyes and even exotic zebra or tiger striped designs.

This visual imagery is more for the angler, than for the trout they’re pursuing.

How to Present the Optimal Size Jig head

If you’ve decided what size jig head to use, attached the minnow you think will work in the water you’re fishing and are ready to catch some trout, the only other consideration is how to present that optimal sized jig to the fish.

Techniques vary with the water fished, and the style of the angler, but in general, a clear four to six foot leader of fluorocarbon tied to braided line on a baitcasting reel, or monofilament on a spinning reel is a good foundation.

Cast the line to the desired location then count to 10. This allows the jig head to move to the bottom of the water.

Once you’ve let it descend, slowly retrieve your line until you feel the jig in the water. At this point it’s a matter of choice whether you retrieve fast or slow. Either way you’ll need to snap up the tip of the rod, (that’s the jig motion) let it go slack to allow the jig head to sink again, then crank in a few turns on your reel, and repeat the motion.

Try faster or slower cranking, higher or lower jigging with a combination of both until you begin to get strikes.

The motion of the jig head in the water is much more important than the weight or color of the jig. A skilled angler will catch trout when the guys fishing right next to him with identical equipment don’t even get a strike.

Your goal is get that rubber minnow dancing in the same motion that a live minnow swimming next to it produces. Get that jigging motion down, and you’ll limit out on trout.